Abortion up to 12 weeks

Prior to 7 weeks some abortions are able to be performed chemically (see section on Morning After Pill and RU486 below).

Vacuum or Suction Aspiration is by far the most common method in Australia for first trimester abortions. The procedure is performed using one of the following anaesthetics:

Abortion is less commonly performed after 12 weeks because of increased risks to the woman. After 12 weeks the baby is so large that a method other than vacuum or suction aspiration is used. From 12 to 18 weeks the procedure is called Dilation and Evacuation. This is nearly always performed under general anaesthetic.

The woman presents at the clinic sometime before the procedure and a substance is used to soften and dilate the cervix. Later that day or the next day instruments are used to remove the baby. A combination of forceps, suction and curettage is often used.

For an abortion later in the pregnancy (18 to 26 weeks) Prostoglandins are used. They are inserted into the vagina or injected into the uterus. This induces uterine contractions and causes the cervix to dilate and the birth process to begin.

The procedure may take some time and the woman needs to be awake to deliver the baby. Some choose to have an Epidural Block. After this procedure some women require a curettage which is performed with sedation.

It is the large amount of Prostoglandins used that causes distress to the baby and subsequently it dies either before or during birth or soon afterwards.

Although some women appear to experience minimal problems, abortion may be followed by serious long term physical and psychological side effects. 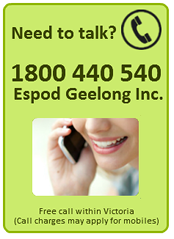 Espod Geelong Inc is a not for profit, non-denominational charity organisation, established in 1986.